Life as a caveman must have been particularly harsh. Days were spent surviving in the company of wild animals hunting and foraging, merely hoping to see another day.

Thoughts of electricity were several millennia away, while "clothes" consisted primarily of animal skins - the result of many a successful hunt.

Fast forward a few thousand years, and leading Pragmatic Play have revived our age-old ancestors in an online slot titled Rock Vegas. It's an amusing mash-up of elements where caveman meets Vegas - where prehistoric clashes with ultra-modern.

The type of thematic confluence that only appears to pop up in certain forms of popular culture like movies, cartoons, and of course, online slots.

It proved a highly fruitful wander back in time this week for one Finnish player in particular, who decided to feed their curiosity by firing €20 bets into the game.

Just a few spins in, one €20 wager suddenly snowballed into a mammoth €101,880 windfall. In Multiplier terms, our winner's brush with antiquity represents a score equal to 5,094 times the bet - just over half the game's advertised 10,000x maximum payout, incidentally. 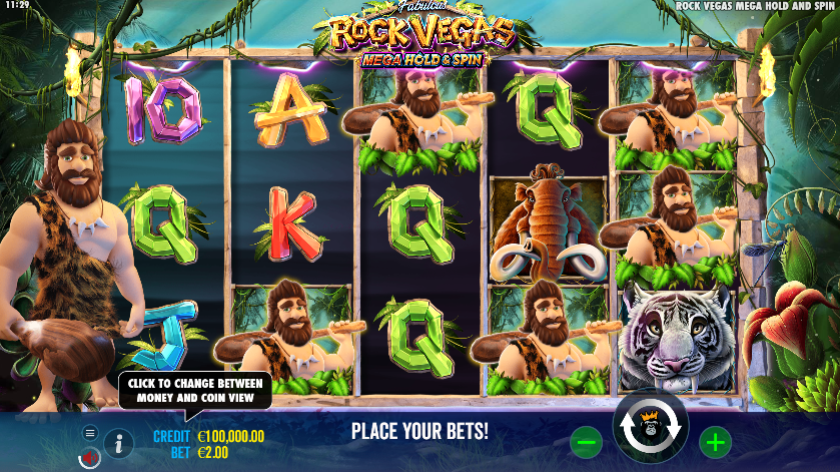 Released earlier this year, Rock Vegas promises to "keep players on the edge of their seats" across 5 reels and 20 paylines thanks to some clever use of mechanics.

Players get to channel their inner caveman with the help of Mega Multipliers, Scatters aplenty, and abundant Free Spins. In addition to its fun cartoon-like theme, another major highlight is the game's Hold & Spin bonus round where Multipliers worth up to 500x are possible.

Indulge in this entertaining pre-historic romp through the jungle today!